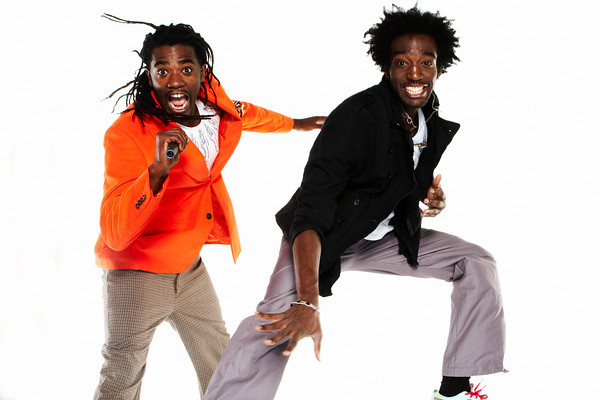 “If ever a group lived up to their name, it’s The Real Live Show. With a distinguished palette of players backing them, New York City purebred MCs Stimulus and Dionysos paint a pitch-perfect portrait of hip-hop’s spirit. Check the album, check the video, but the real-deal hip-hop experience is seeing them live.” – Village Voice

Born and bred in the outer boroughs of New York City, Stimulus and Malik Work (aka Dionysos), have an extraordinary artistic presence in the trendsetting nightlife scene of Hip Hop’s birthplace. Lyrical counterparts since the age of twelve (born 16 days apart), they met in a scholarship program and have been pursuing their vision of “Urban Excellence” ever since. Separated only by secondary school, then university, the two reunited to form rap conglomerate “The Eclectic Regiment.” Their themes of revelry and social inclusion quickly took hold of NYC’s then new ‘multiethnic hip hop party generation’ and the duo capitalized; promoting clubs and special events unrivalled in positivity and creativity. See: Blue Note, Jazz Standard, Joe’s Pub, Mercury Lounge, Bowery Ballroom, Irving Plaza, Cheetah, Lotus, Webster Hall, Pink Elephant and Cielo. The more success they garnered, the more they were imitated; until they discovered live musicians.
They decided they would document their new experiment with live musicians and broadcast a reality show on the internet called The Real Live Show. The music took New York by storm. People from all over the world were flocking to Izzy Bar every Tuesday to catch it live. Stimulus and Dionysos (now Malik Work) became hosts of a barrier-breaking format.

NYC’s premiere Hip Hop band was born. Some of the industry’s most sought after musicians became regulars, i.e. Bilal, Roy Hargrove, N’Dea Davenport, Swiss Chris, Raymond Angry, Tarus Mateen, Kim Thompson, Rob Glasper, Greg Hutchinson, Deantoni Parks and Chris Dave. Over the years they continue to refine their music, having dropped the improv sessions for a more polished format.
They are night club legends. Stimulus is currently DJing working all the hottest parties in the city. Malik is acting in films and commercials. With the sophomore album coming and collaborative projects in Europe, the Middle East, and Brazil… The Real Live Show is just getting warmed up